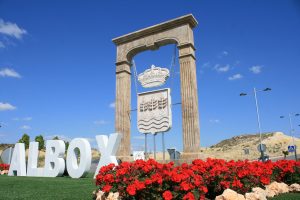 In the municipality of Albox, founded by the Arabs, remains of the Neolithic have been found, which proves the existence of human communities for millennia.

The interior of the church of Santa Maria, built in the 18th century, houses the remains of an altarpiece by Alonso Cano. It is of special curiosity for the visitors the sanctuary of Our Lady of the Outgoing, that commemorates a Marian apparition that took place in century XII.

The monuments of religious character are completed with the hermitage of San Antonio, erected during century XVII. Among the architecture inherited from the period of Muslim rule is the Tower and Aljibe of the Aljambra, the latter is still used. As the last point of the tourist route visitors can visit the tower of Terdiguera and the Cerro del Castillo.

Activities related to handicrafts are scarce, although there are some who make dishes and pottery vases and others who work on looms or make carpets, some from courses for young people.

The gastronomy of Albox is perfect for those who enjoy a good, rich and varied food. Among the typical dishes of this municipality of Almeria are the crumbs, the choto a lo pastoril, puchero, stewed wheat, blood fry, egg stock, gurullos, dips, balls and hornazo.

Among desserts and sweets, are typical of this town the rum punch, orange, almonds and sighs.

The festival period of this locality of the comarca of almanzora begins in the month of May. Specifically on the 5th, the Virgen del Saliente leaves in procession from its sanctuary to the town to celebrate its appearance more than 700 years ago.

As good followers of the rules of courtesy, the inhabitants of Albox organize a pilgrimage on September 8 to visit the Virgin. In October, the Loma festivities are celebrated and, beginning in November, the Fair and Festivities of the Saints take place.