The day Albox declared itself a "Republic"

The famous Unilateral Declaration of Independence (better known by its acronym, DUI) that is causing so much concern since its proclamation in Catalonia is not the first by a territory belonging to the Spanish State.

One of the most famous separatist attempts to have happened in the last two centuries was undoubtedly that of the Canton of Cartagena (1873-1874) but only a few kilometers away, there was, for a few hours at least, a municipality that experienced a similar situation. It happened in 1891, when the Federal Republic of Albox was proclaimed. Despite the 126 years that separate the Catalan DUI from the Albojense, there are at least anecdotal parallels between the two secessionist statements.

The story of the attempted independence of Albox comes to us from an article in an English newspaper at the end of 19th century. It was in the 'Manchester Courier' where a local historian, Miguel Ángel Alonso, discovered a story that helped him to follow the thread and recover this historical episode. And if the arrival of the Forces and Corps for State Security in Catalonia and its action on 1st October 2017 has been one of the most commented episodes of the so-called 'procés', in Albox the facts were not very much different. 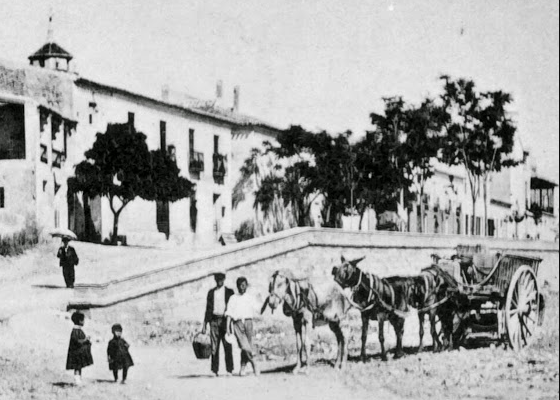 At the end of the 19th century, Albox was a town unknown to much of Spain, and therefore to the world. The nearest railway station was a two-day trip and an outdated industry of wool and fabrics for farmers made it possible that many families managed to live frugally. Nevertheless, the population - close to 11,000 people - meant the town was booming and its wealthier citizens could spend time in one of the two casinos that the town boasted, or enjoying a show in the theatre.

At the time the Mayor was José Antonio Mirón Jimenez. "Conservative and influential", according to Miguel Ángel Alonso. Local elections complied with the requirements of the time, that is, they were heavily controlled by the local poobah, whose motto would be "For friends we have the favour and for enemies we have the law." Which worked very well for Don José Antonio (they used to call people like this 'El Cacique') who ruled thanks to the vote of the wealthiest residents and in particular, to a coterie of 54 persons, who thanks to the specialised voting system were those who dictated who should occupy the Mayor's office.

But in 1890 a new national party called the Partido Liberal Fusionista guaranteed universal suffrage to Spain. This modification to the voting system revolutionised the political landscape by allowing all those over 25 years to vote regardless of their purchasing power, with the exception of women and it meant that the then conservative mayor, Don José Antonio Mirón Jiménez, paradigm of the cacique of the time, no longer had a majority. In the elections of February 1891, which he still believed he would win, it came as a complete surprise when, thanks to the new system of universal suffrage, a humble resident of the Albox neighborhood of Locaiba, Andrés Pio Fernández, ran as a Liberal candidate and was elected as the new mayor.

"The people speak, although their voice is not always accepted with pleasure"

Those who, until then, had held the monopoly of power were not pleased to say the least. So badly did the defeat sit that they refused to leave their positions and, as they had not been able to win the elections with the new democratic system imposed by the then Spanish Prime Minister, Sagasta , they thought of a quick solution, namely "Found another state: proclaiming the Republic of Albox".

The morning after election day a storm of people surged through the streets waving sticks, guns and swords. Yet, worse than the weapons they were carrying were their banners and cries of: "Long Live the Federal Republic of Albox!". At the head of the mob was none other than the defeated former Mayor.

Don José Antonio and his accomplices proclaimed a "universal declaration of independence and a brand-new country" which would have "nothing" to do "with Central Government in Madrid". The experiment, based and inspired by the 1873 events which continued for 7 months in Cartagena didn't last long in Albox.

After two days "of terror", the provincial Governor realised that what looked like a joke had little humour about it, so he proceeded to send the Civil Guard troops to regain control. And the coincidences with the Catalan 'procés' do not end here, twenty one rebels were detained, although their captivity lasted only a few hours, same as the "republic". The Benemérita resumed control and restored the current legality.

It was the end of the first - and short-lived - Federal Republic of Albox. Now, it remains to be seen if the end of both episodes will be the same.