30th anniversary of the coronation of the Virgen del Saliente

More than 15,000 people attended the ceremony in Albox's Plaza Mayor

On the afternoon of August 7, 1988, Plaza Mayor in Albox was crowded. Together with ecclesiastical notabilities such as the nuncio of the Vatican in Spain, the then Bishop of Almeria and more than fifty priests, over 15,000 people gathered in the main square of Albox (far exceeding the number of inhabitants of the town) on that hot afternoon in August . 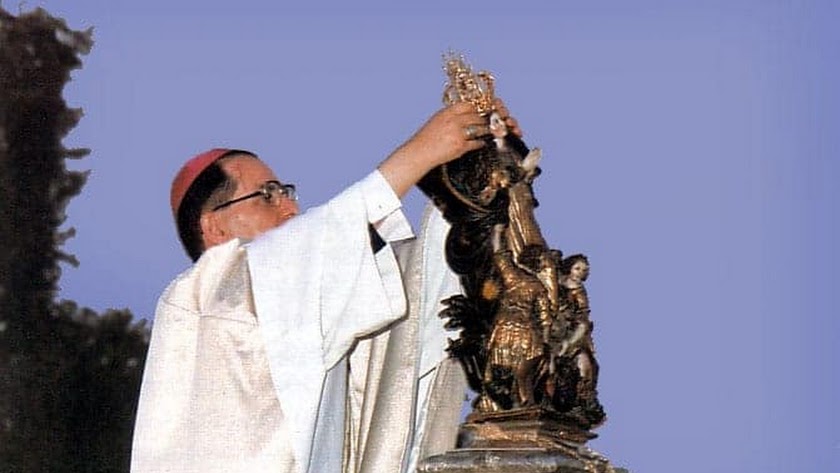 Each and every one of the thousands had come here for the same reason: to see the Coronation of the Virgen of Saliente, for above the head of this local icon there was not yet a crown. The valuable elaborated piece was on a red pillow and a few meters from 'The little one'; The crown had been made with gold and diamonds donated by the faithful.

After the mass celebrated in the Plaza Mayor, the nuncio of the Holy See, Mario Tagliaferri, stared at the Virgen of Saliente and pronounced: "By girding this crown, these servants recognise their son king of the universe and invoke the Virgin Mary so that, with humility, on this earth, one day they may rise to the kingdom of heaven."

Immediately afterwards, he took the crown with great delicacy and showed it to those present, transporting it with the care of those who realise that he has, in his hands, a work of art; of great economic but above all incalcuable sentimental value.

He arrived at the "little one" and placed the crown. There followed a release of brightly coloured balloons and the thousands present broke the silence with a thunderous applause. Celebrations including many fireworks went on late into the night and early morning.

The month of August 2018 has therefore been 30 years since the act of Coronation of the Virgen of Saliente. An event that neither the Albojenses nor the thousands of people who arrived from numerous points around the country will ever forget. In fact, coinciding with the anniversary of this act, both the parishes, neighbourhoods and the Town Council have recalled one of the most massive religious events that are remembered in the province of Almeria.

It is also impossible for the neighbours who lived it not to remember the celebrations that involved the entire municipality during the months prior to it. The decoration of the whole town was accompanied by the Coronation Hymn composed of a poem by the Almería writer Julio Alfredo Egea and with music by Juan Alfonso García, which almost in unison rang in the voices of thousands of people, the fireworks show and the later procession through the town of the Virgen del Saliente now crowned.

Key moments of that historic August 7, 1988 for Albox and for the thousands of faithful who travelled to a small town in the  Almanzora Valley to be, on the day of his coronation, before an image whose devotion does not understand borders. The memory of that day has remained in the town, which in turn now begins the countdown to the next pilgrimage to the Shrine of Saliente that will take place in the early hours of September 7-8 and for which a greater participation is expected than in the last few years. For about five hours whilst walking the 20km pilgrimage under the stars, surely this year many will think back, remembering where they were and how they lived on the day of the coronation in 1988.